The Leach Pottery: a living tradition 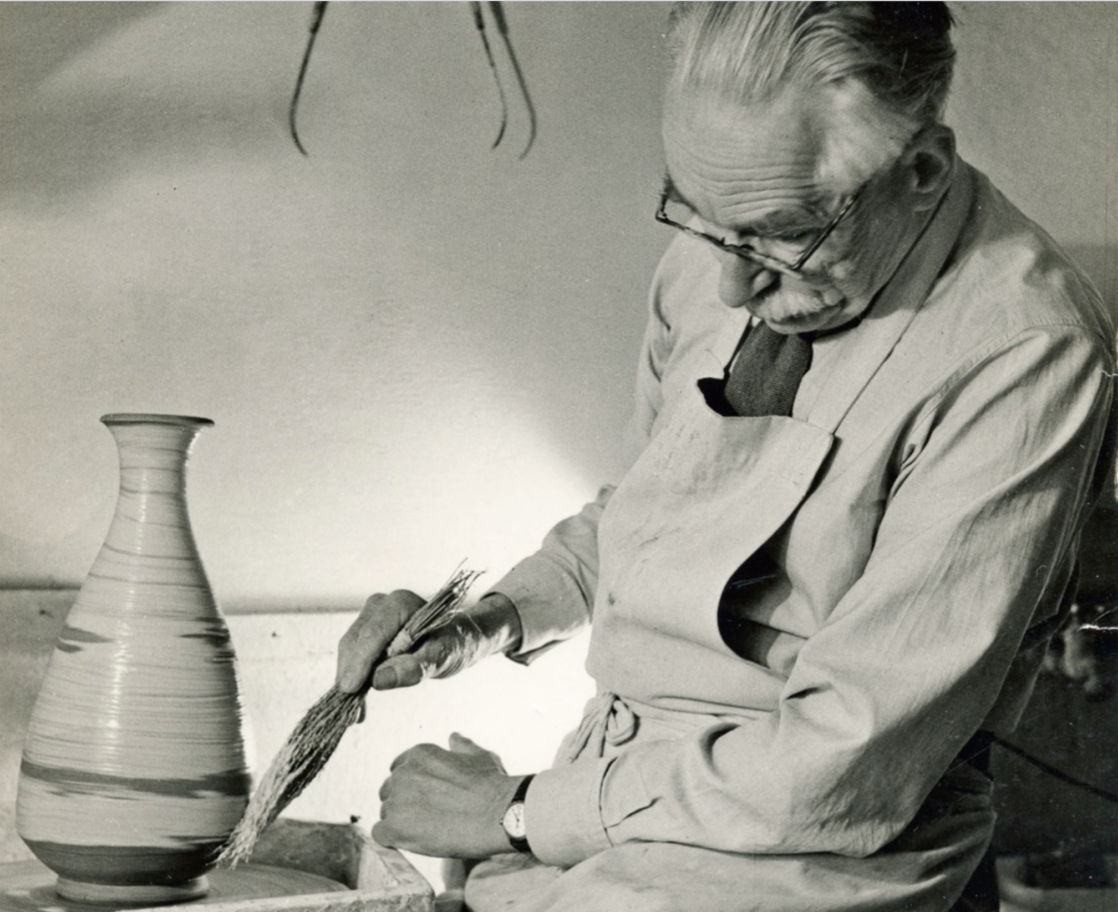 The Leach Pottery is inimitable. The fact it was established by an ‘artist-potter’ in St Ives, Cornwall, who had returned from training in Japan is unusual. That it survived a century of scarce financial pickings for the artist-potter is remarkable. It has seen off the Great Depression and the Great Recession, punctuated by the Second World War. It has witnessed societal changes including women’s suffrage, increasing social mobility and improving public education. The Machine Age and the Atomic Age passed as the Mechanical and Industrial fell and the Digital and Information Age surged. Yet the Leach Pottery remains.

St Ives was a problematic location for a new pottery in 1920: there were no rich seams of local plastic clay, nor was there much fuel for the wood kiln. With funding from Frances Horne, a local wealthy philanthropist, Bernard Leach wasted little time in acquiring a sliver of land on the outskirts of the town nestled between the road and the River Stennack. How otherworldly it must have been, laying between farms, fields and the remnants of tin mining.

Bernard Leach claimed and was ascribed multiple statuses, here reduced to one: opposition. John Leach says, with a smile, that ‘grandfather was a rebel’. Bernard had agreed with his dying father that he would pursue banking, yet eventually journeyed from Japan, with Shōji Hamada, to establish a pottery and begin a new life as an artist-potter. Bernard sought to forge his own expression and existence.

His wife, Janet Leach said: ‘…by making this decision to establish himself in St Ives he intuitively set a pattern for 20th century artist craftsmen – “live where you can LIVE”.’

The physical and societal contexts around the Leach Pottery have, like the pottery itself, irrevocably changed. The idea of a ‘Leach tradition’ suggests something fixed and transmitted between generations – but what is it? Perhaps the Leach tradition is one person, a glaze like tenmoku, a pot thrown in a rural studio and reduction fired, tableware of muted colours, Standard Ware, a way of training, the Sung Standard, communal production, forging international connections, or the transmission of stylistic elements. The Leach tradition is many things but it is fluid, divergent, and about pots and ideas.

A ‘Leach tradition’ suggests something fixed and transmitted between generations . It is many things but it is fluid, divergent, and about pots and ideas. The Leach tradition emphasises knowledge. Bernard Leach and Shōji Hamada were early studio pottery pioneers, aspiring artist-potters and, by some necessity, autodidacts – for where could one learn the potter’s processes to make something beyond the industrial or decorative? They no doubt found difficultly in balancing experiential learning against their inevitable failures. It was important, certainly to Bernard, that the potter use their faculties and experience to arrive at an 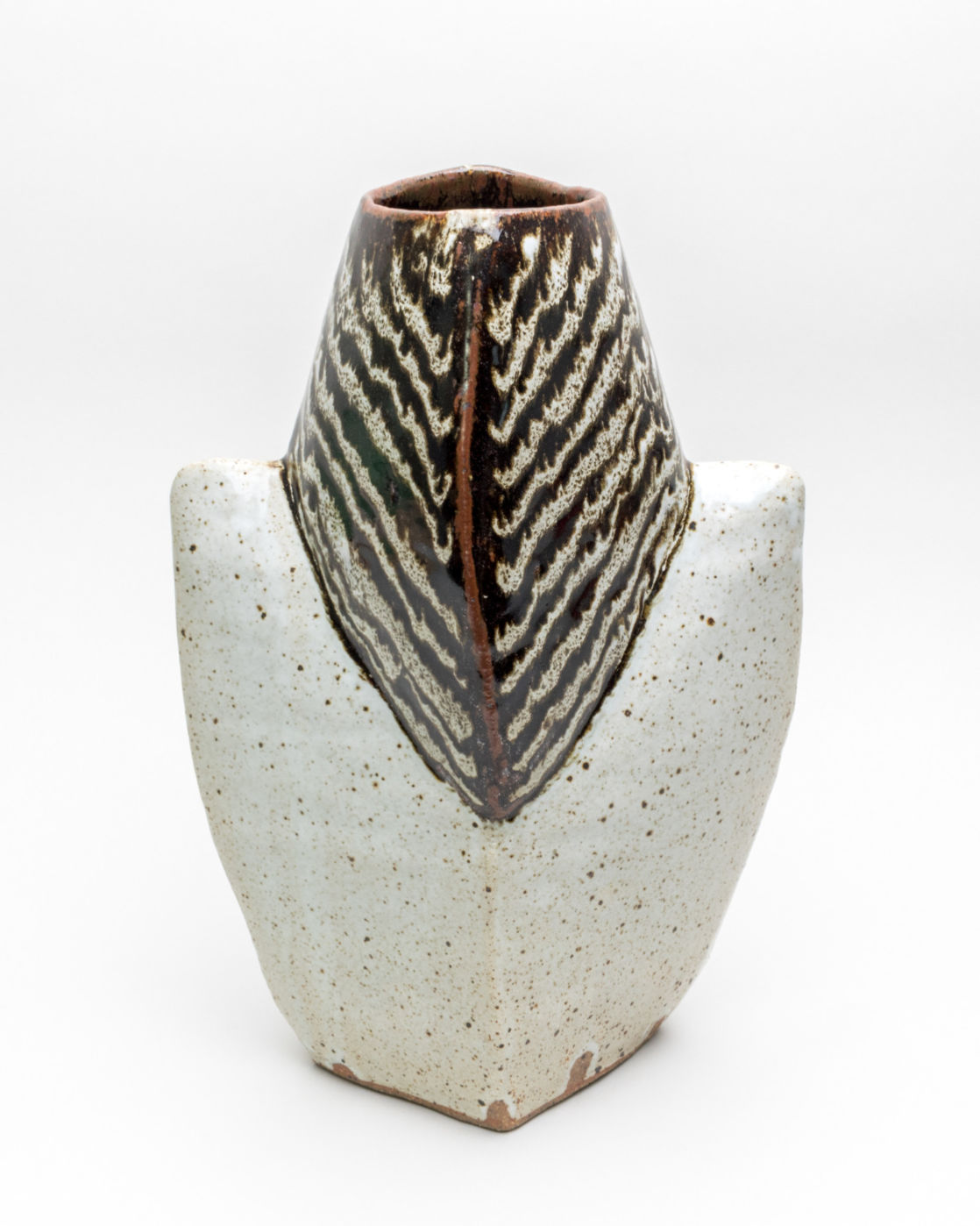 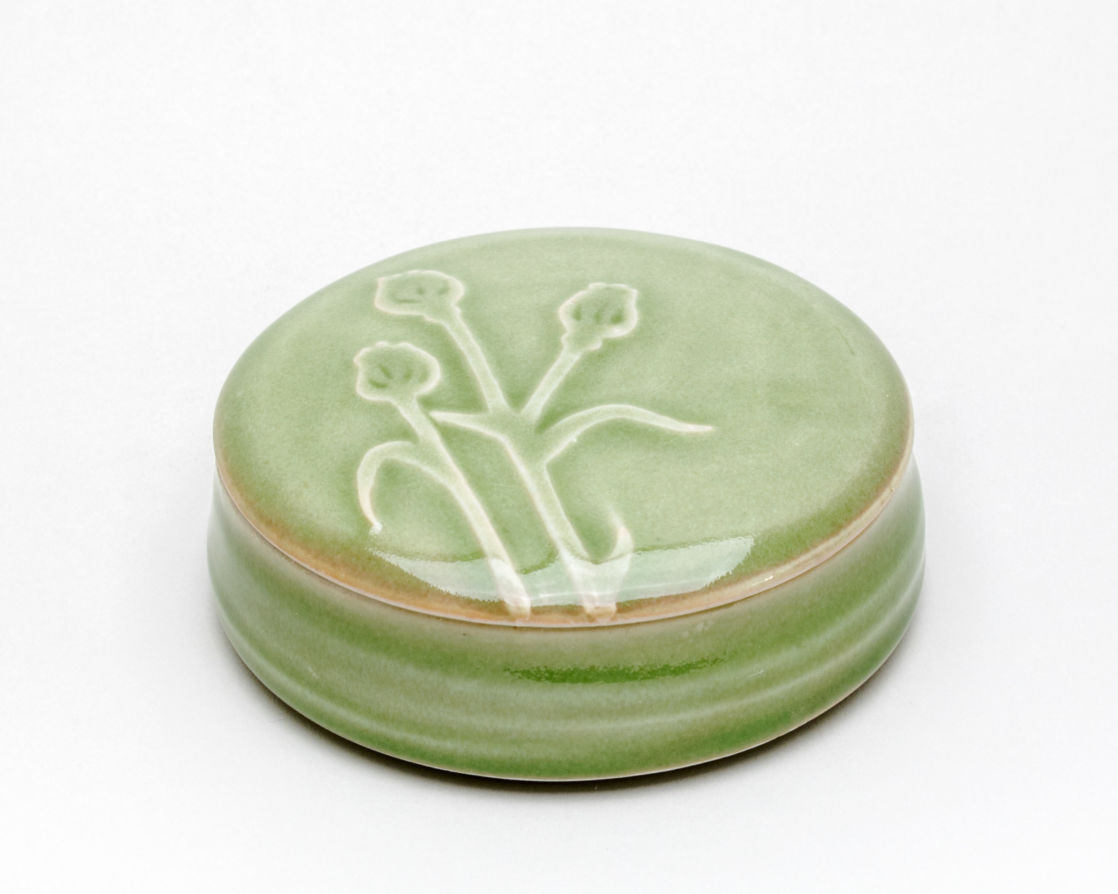 embodied and tacit knowledge. Where practical, some of the artist-potters’ knowledge now resides in texts, such as Bernard Leach’s A Potter’s Book – 80 years old this year – digital resources, educational institutions, studios and practitioners. But what are the implications of this knowledge?

In his article Belief and Hope, Bernard Leach says that the potters’ ‘disciplines of fire and clay’ are the point of equilibrium of ‘the unity and maturity of man… a potter is one of the few people left who uses his natural faculties of heart, head and hand in balance – the whole man’. While deeply patriarchal, the idea still inspires and hints at a spirituality in the act of making as a ‘complete’ potter.

Making a pot and understanding the processes involved leads to a unification of knowledge; potters want to know, bringing life to the potter and their pots. This knowledge continues to intrigue audiences, as observed at ceramic demonstrations or on social media today.

Another key element of the Leach tradition is the transference of skills and stylistic elements. From potters who trained at the Leach Pottery and remain(ed) steadfastly ‘Leach’ to those who develop(ed) a different voice. This diffusion occurs through those with direct experience of the pottery and those who have met ‘Leach’ through tributary teaching and inspiration – imagine the impact of the chapter ‘Towards a Standard’, from A Potter’s Book, written in the 1940s and still read today.

This transmission is not homogenised nor one-way and passive; it is complex and nuanced. One period of influence began in the early 1920s with Leach and Hamada who explored English country pottery through the lens of East Asian ceramics. The pots of Japan, China and Korea played strongly on Bernard Leach – this, alongside Hamada’s interests, characterised a period where raku, slipware and stoneware were made concurrently.

Along with these experiments were failings too: enter Tsurunosuke Matsubayashi, a ‘39th generation’ potter who rebuilt the first kiln. Matsubayashi shared his technical knowledge with Bernard Leach, Michael Cardew and Katherine Pleydell-Bouverie and built further kilns in the UK. Cardew became famous for his slipware and Pleydell-Bouverie for her ash glazes, leaving one to wonder about the cross-fertilisation that took place. 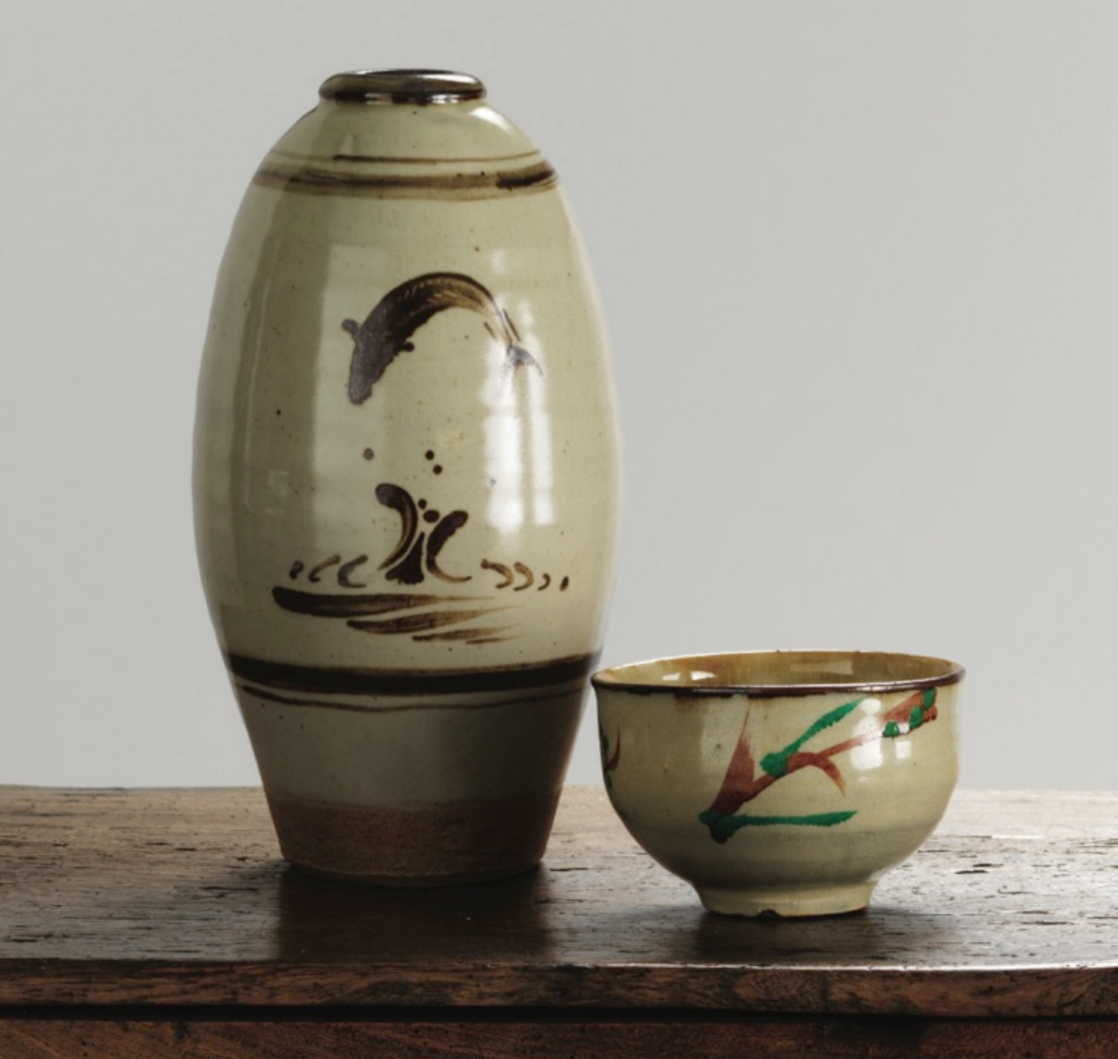 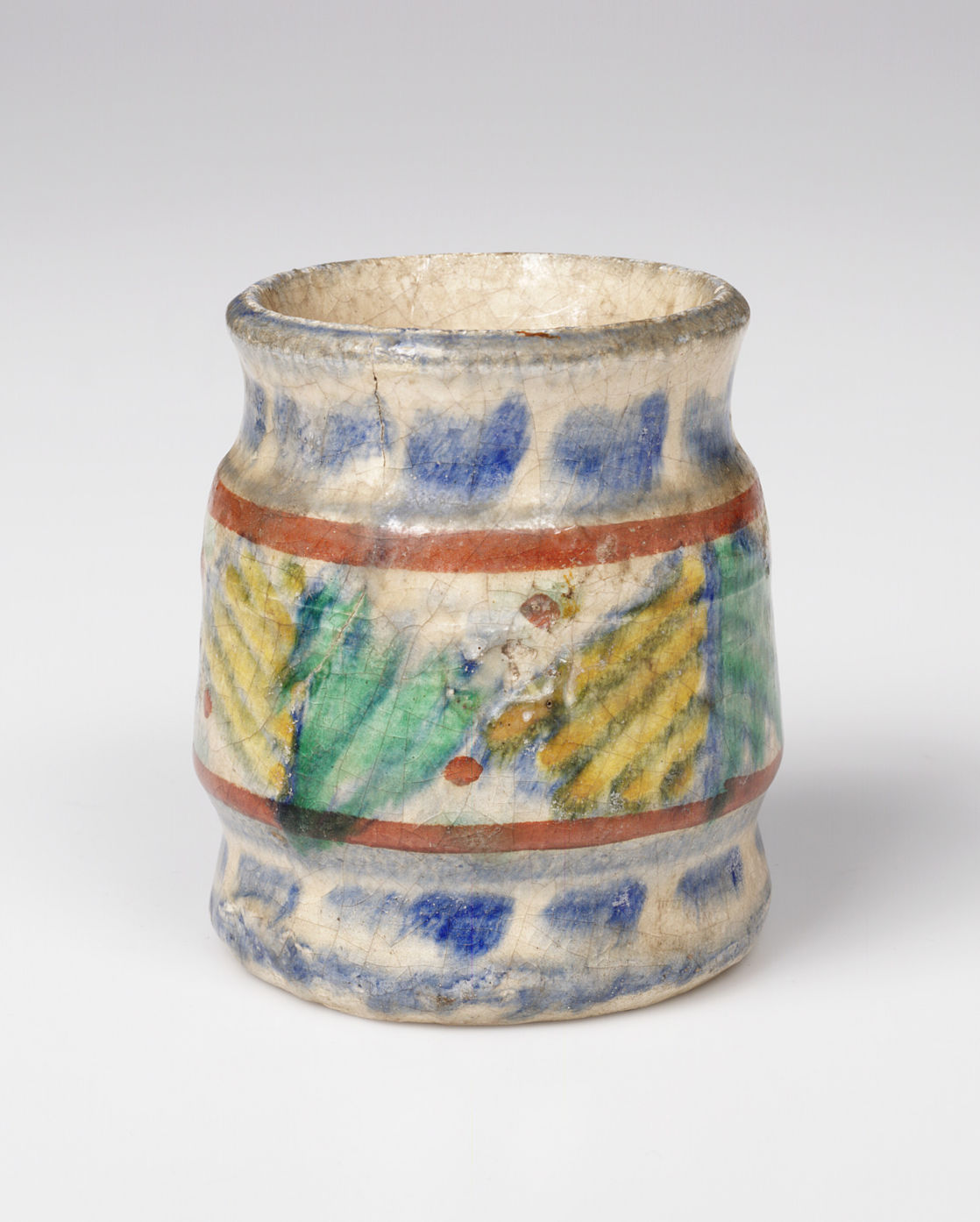 Fast forward to the 1930s, where David Leach observes Harry Davis’ positive impact on the pottery, helping spur David to initially train as a Pottery Manager in Stoke-onTrent. David Leach then initiates significant changes in the late 1930s; ceasing slipware production, introducing Standard Ware, and starting an apprenticeship system with William Marshall. David Leach made the pottery ‘work’ – a proficient manager and potter, he tightened-up the business and possibly also the pots. Yet, by 1956, David and Michael Leach were establishing their own potteries in Devon and training students too – so initiating a new interpretation of ‘Leach’.

Moving on to the late 1950s, Janet Leach began shifting focus from tableware to the individual. With a vigorous aesthetic of her own, the Standard Ware forms became more robust, the apprenticeships ceased, and emphasis moved towards international students. After Bernard’s death in 1979, Standard Ware production stopped and, after Janet’s death in 1997, the pottery became the creative domain of Trevor Corser and Joanna Wason, later joined by Amanda Brier.

The Leach Pottery’s direction changed again when it reopened as a museum in 2008 and began making soda-fired tableware – an aesthetic break that allowed the then Lead Potter, Jack Doherty, to draw a creative line and present a new Leach aesthetic. Today, under current Lead Potter Roelof Uys, the Leach Studio has returned to offering apprenticeships and producing reduction fired Standard Ware.

Today’s studio of six potters carries on the tradition of making tableware and also carries it forward, bringing new approaches to production and aesthetics so that the pots remain contemporary to life. The potters also continue the tradition of making personal pots that evolve aesthetically, yet are still ‘Leach’. The interest in function and artistic expression carries on in new directions, as exemplified in their work with the gallery Thrown Contemporary, by making tableware focussed on enhancing the shared dining experience. 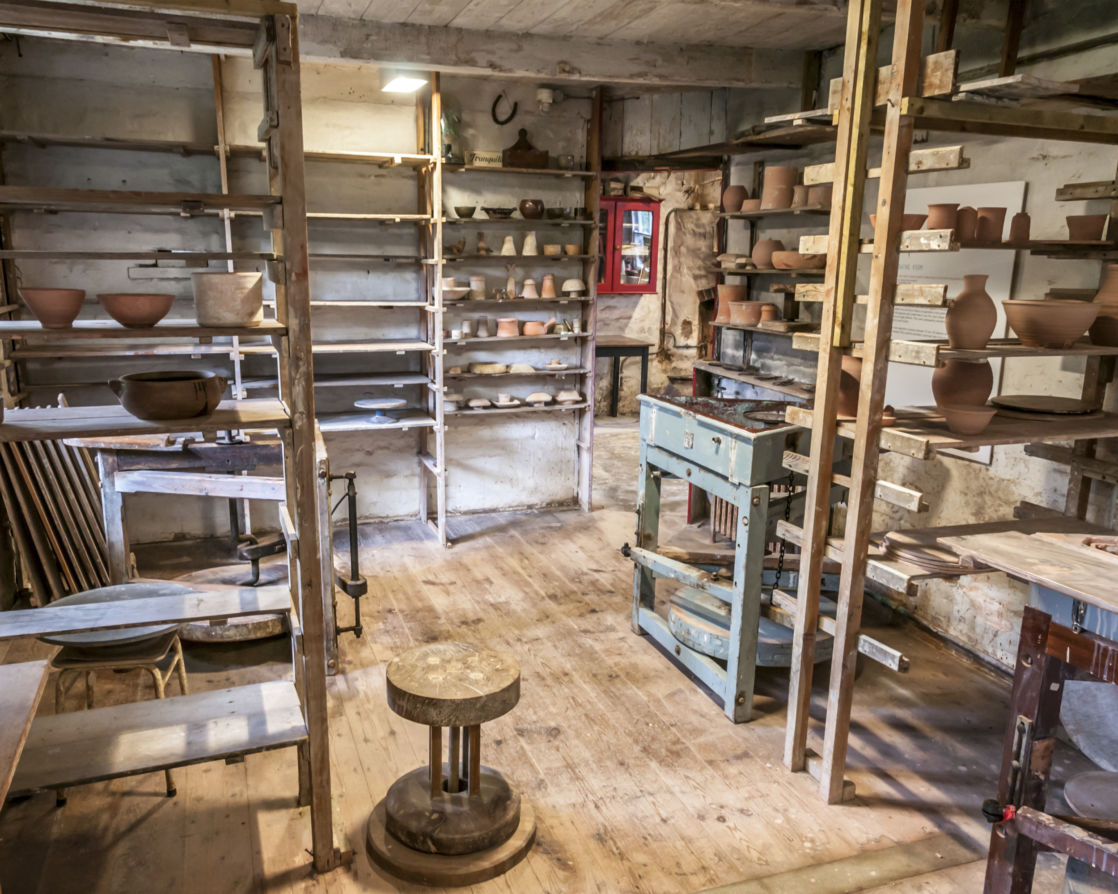 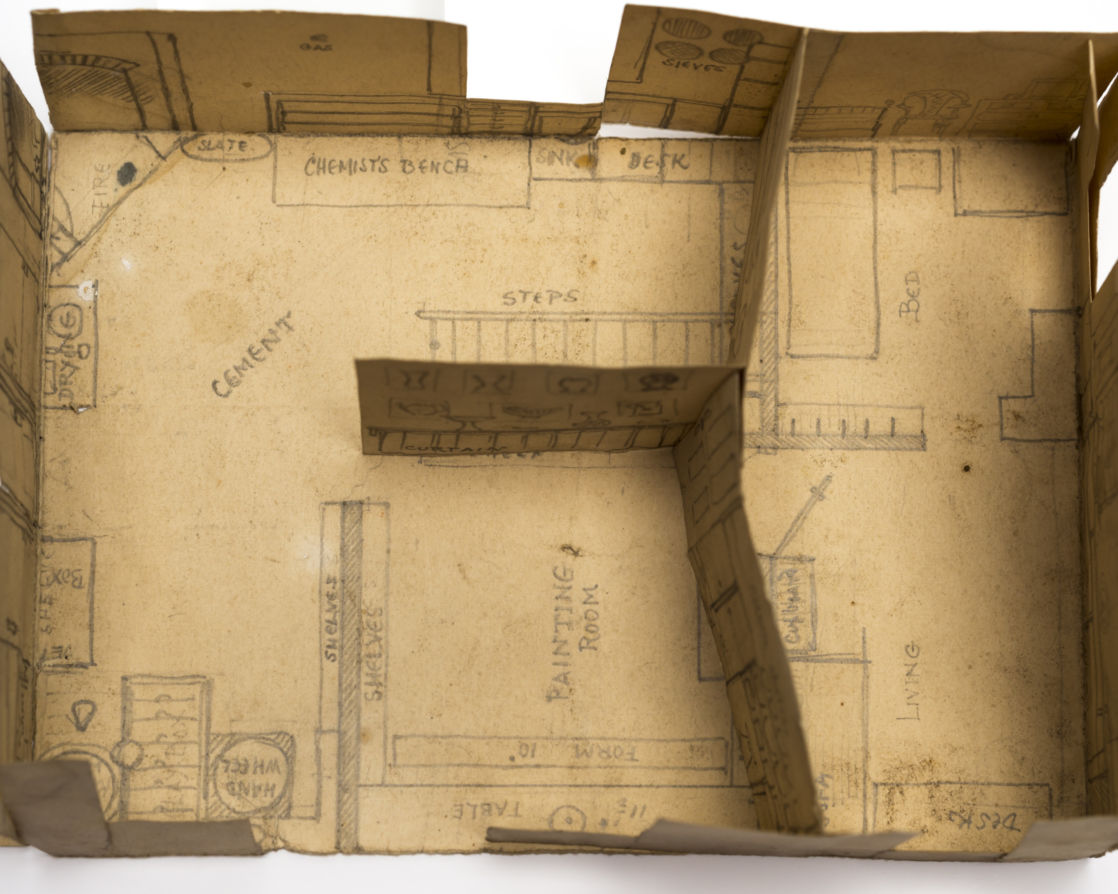 The Leach Pottery is unique; an unusual locus of ideas and people. It is a living tradition that continues to evolve and adapt over time, responding aesthetically and pragmatically to the world. These changes are enmeshed with the hundreds of potters who have joined the pottery over the century and continue to come. The Leach Pottery is about what it makes and also what it does – which is to train people in skills, propose an aesthetic, help people experience clay, and to engage us all with what it means to work as an artist-potter.

For a limited time, subscribe and get 30% off the cover price with our 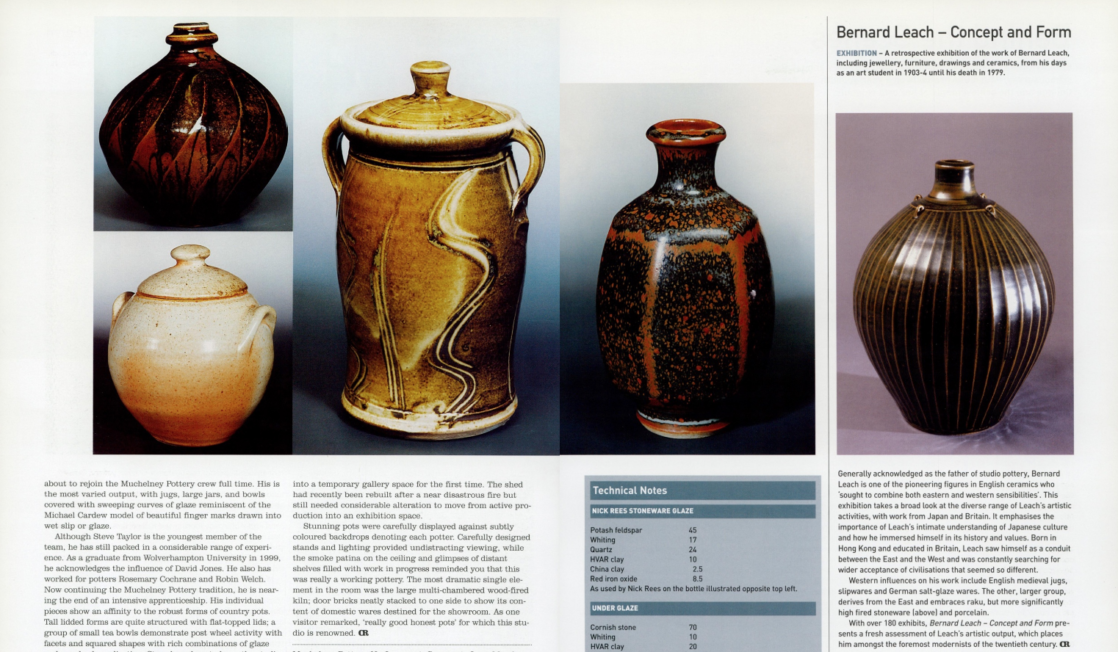 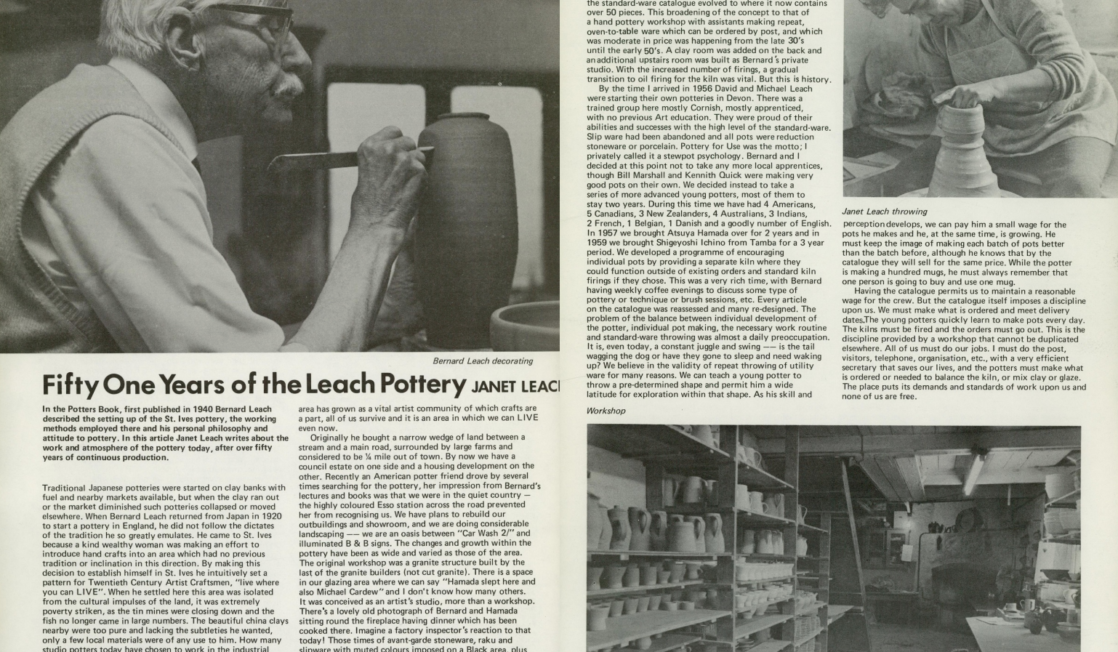 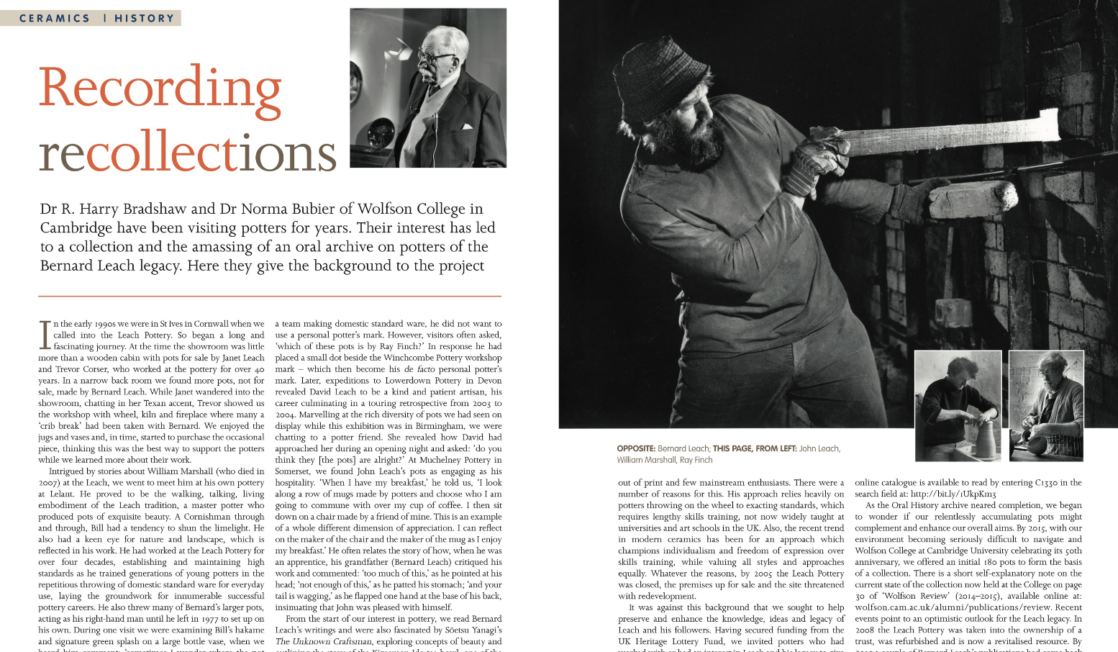